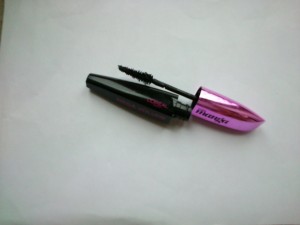 I finally got my hands on the new Loreal Miss Manga Mega Volume Mascara this week. I had seen a few reviews about this before Christmas and was very keen to try. It finally went on sale last week and I went out to get some the first chance I got!

The first thing which drew me to try this mascara was the glossy pink lid on the tube ( as I’ve said before, I’m a sucker for packaging) and also the cone-shaped wand which is meant to help amplify upper lashes and help reveal lower lashes. Inspired by the Japanese comics or ‘Manga’ this mascara is meant to help achieve the wide-eyed look featured on characters in many of these comics (for more information visit http://www.loreal-paris.co.uk/missmanga/instamanga.aspx)

It comes in a variety of shades, I have plumped for my normal black but I am keen to try the violet version ( and as it’s on offer at the moment, I can totally justify it!)

It looks quite clumpy in the picture below, but the formula actually goes on really well. They advise you to use the wand using a zig zag motion to get full coverage of lashes and use the end of the cone-shaped wand to capture the lower lashes. I used it like I would any other mascara, and I used three coats to get the full lash look I like myself. It’s a really glossy formula too and it doesn’t rub off on the under eye area which I find with some volumising mascara’s.

I have put a photo below of the mascara applied to my eyes (it’s not the best photo, as I hate taking photos of myself), but it gives you an idea of the fuller lash look which this mascara helps you to achieve.

This is a great new product release for 2014 and one I would definitely recommend you try. The mascara is available at Boots.
It will retail at £8.99 but is currently on offer for £5.99, so you can afford to treat yourself at that price!

This site uses Akismet to reduce spam. Learn how your comment data is processed.

Visit my SPA TO GO Store for beauty and lifestyle products tailored to you!